Telguard came to RVL with a strong position in the door entry market. Its extensive product range utilised analogue telephone lines to confirm the identity of the entrant before permitting access to the property. Realising that the future of door entry systems lies in leveraging the internet and, more specifically, SIP for voice and video calls, Telguard commissioned RVL to bring the product up to the cutting edge of technology. SIP calls were to be made using standard ‘softphones’ such as Bria, which is available on many platforms (iPhone, iPad, Android, Windows, Linux), as well as desktop video phones. Having already invested in designing key panels which communicate over CAN bus, it was decided that a new SIP Hub PCB and accompanying software would be developed to integrate the existing panels, thus providing a cost effective solution with all the benefits of a new product.

RVL worked closely with the existing development and management team to derive software and hardware specifications for a new SIP Hub solution. Once completed, we drafted a full project plan which was used to derive a quotation for development of the entire project.

For the hardware, we choose an IMX6 dual-core ‘system on module’ (SOM) produced by Variscite. This choice helped to keep hardware development costs down as the CPU, RAM, eMMC, Wi-Fi and Bluetooth components are already tracked on the SOM. Telguard also have the flexibility of ordering different configurations of the SOM if significant enhancements are made in the future. We then designed and laid out the base board (onto which the SOM fits), containing 2 x Ethernet ports (on PCIE bus), 2 x CAN bus interfaces, 3G modem (on USB bus), USB A, micro SD and an RTC. Early on in the project lifecycle, Linux was identified as the OS of choice for implementation. Using the Yocto Linux build system, we built a customised Linux distribution to interact with our designed base board.

The end result was an Embedded Linux build capable of interacting seamlessly with the entire hardware solution. Developing software on a Linux system has huge benefits, not least the vast array of libraries available under GPL and the fantastic open source communities that come with them. The software was developed in C++ and utilised a SQLITE backend to store parameters locally. The developed sip-hub program communicates with a cloud-based server to download customer defined configurations and upload log/diagnostics data. It is also possible to remotely upgrade the sip-hub program and Linux packages from this same server. Closer to the action, the role is to route audio/video to and from the key panels and manage incoming and outgoing SIP calls. This needs to be done whilst maintaining a large number of simpler tasks, such as driving relay contacts and monitoring sensor inputs.

One of the major challenges of this project for RVL was supporting the incredibly rich feature sets of the existing Telguard product, with its huge array of configuration options. For instance, a single button press on an entry panel can attempt to call any number of endpoints in turn, until the call is finally answered. Each endpoint can be set to ring for a certain number of seconds and can even be skipped if the call is made in unsociable hours (which are, of course, entirely configurable). The depth of these features provided a huge development task, which we are happy to say has been successfully completed.

The product is now in the final stages of field trial and is gaining considerable interest from important clients. We are currently in the process of building the first pre-production batch. Telguard now have a platform which not only meets the requirements of today, but will undoubtedly be capable of much more in the future. The future is full of opportunities for Telguard, and RVL is proud to be working with them on this exciting project. 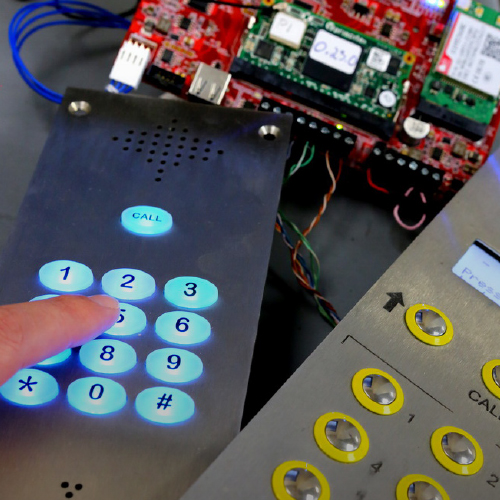